A Little Cake and Coffee 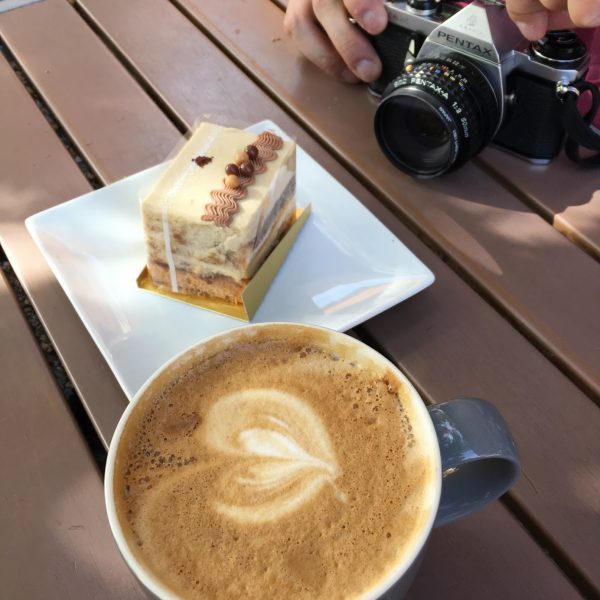 I had opened the window on Saturday afternoon. I remember looking out, noticing how beautiful the weather was, and seeing people lounging in chairs on their patios, basking in the Autumn sunlight. Last night, however, I could not remember closing the window. I started to completely panic.

The window was closed now, but what if somebody had climbed in through the window and closed it themselves? This left me completely exposed to a hypothetical person who could be hiding in any closet, any cabinet, any shelf. After checking even behind my curtains, I did one more check of the locks and settled back into my bed, while the rest of me felt incredibly unsettled.

This story may feel strange or unsettling to you, but is part of my night time routine, more frequently than I’d like.

But what if I had decided that I had, in fact, closed my window? I would have stayed in my warm bed, having fallen deep into the comfort of my pillows and the starlight that sparkled far above me. My eyelids would have been the blinds for my mind, and I could have spent my time thinking about the luxury of nothingness.

Nine out of ten times, when imagining the outcome of a given situation, I always imagine the bad and the worst. And I think I could assume that most people do the same. Whether we’re worrying about the future, we always imagine it disappointing us.

But think about where you are right now. How bad is your situation? I can say personally that mine is not so bad. But at some point, it was the “future” for me, the very same “future” I had imagined would be so awful.

I think we often imagine and predict the worst case scenario because we have been hurt and disappointed too many times before. But I think there is some validity to imagining and thinking more optimistically, and preparing for a nicer, more positive scenario. When we imagine the worst case, we act in ways that aren’t productive and are frankly, quite irrational (ie. my window closing paranoia). I’ve found that even when I do imagine a disappointing scenario and it comes true, I’m still just as disappointed and not that prepared regardless of how much worrying I did beforehand.

As a result of my “findings,” I’ve decided that for every bad outcome I imagine, I will imagine a positive outcome. It’s incredibly draining to worry negatively about things that haven’t even come to pass yet, and I very literally lose sleep whenever I spend my time worrying about what others think about me, about their opinions, worrying about if this or that doesn’t work out, or if I will be hated in the end.

But  it turns out things tend to work out. People are much more forgiving and apologetic than we give them credit for. We tend to be rewarded for resilience, and even when we’re not, we usually can find one or two people to support us through it all. I’ve found that the people who love you will love and support you unconditionally, and spending time even so much as thinking about the people or things that consistently hurt you does nothing to change the present, the past, or the future.

If you’re reading this, you’re very much alive and you’ve survived whatever you were so worried about, and the same goes for myself.

So I encourage you to focus on what makes you happy right now, and if you feel the urge to worry, well, I’ve found a little cake and coffee always helps. 🙂