Heaven & Sin in the Canals: Amsterdam 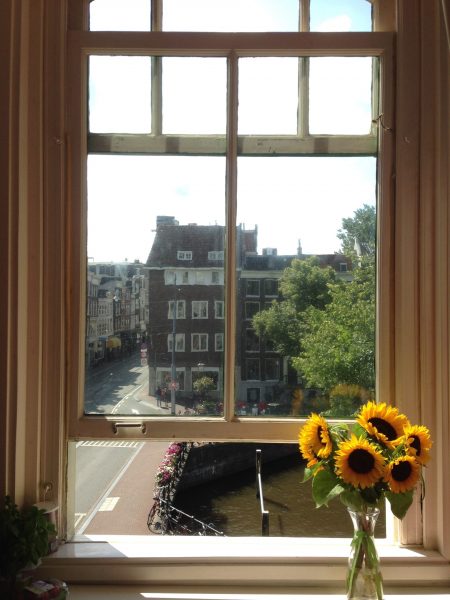 When things begin to feel aimless or stifling, my first instinct is to try to get away.

Lucky for me, my friend Kaitlin was living in Amsterdam, her soul city, for the summer. The last time I went was during my semester abroad, just as Christmas lights had begun illuminate Europe. I remember thinking how bizarre and unusual this city was. It was much colder then, so most of our time was spent seeking refuge in hazy coffee shops and pancake houses. It went by much too quickly for a city that has so much to offer.

Which is why the trip this time around was so much more special. One thing I’ve learned about traveling is that you should always go somewhere at least twice. The first time you visit any city, it can be very overwhelming since you want to get everything done, and generally, with any decent city, there’s probably more to be seen than is possible in one trip. So this time, I visited Amsterdam in the summer, with a few more days at my disposal than the last time.

Kaitlin could not have lived in a more perfect location. Her flat looked over Keizersgracht, one of the canals that you might see on postcards. The little crossing over the canal was embellished with flowers right out of a Van Gogh painting. It all felt surreal and fake, so for the duration of my stay, we would randomly yell out “FAKE!” But it was real, alright. I would walk out of the vertical apartments into sunlight, surrounded by the picturesque canals and cobblestone streets.

Kaitlin has yet to steer me wrong in terms of life, but mostly in terms of food, which I value and appreciate greatly in our friendship. So obviously, one of the best meals of my life was at Sampurna, an Indonesian restaurant by the flower market. We had been ravenous, but I know that wasn’t the only factor in the ridiculousness of the meal because I went back again the next day for lunch. Indonesian food is a really nice mix between Thai and Indian food. I’m salivating just thinking about it and wow, the things I would do to experience that meal again.

Speaking of Indian food, Kaitlin also took me to an Indian restaurant with the best Chicken Tikka Masala I’ve ever tasted. Unlike others I’ve tried, this one had a strong cinnamon taste, and even for those of you who don’t like cinnamon, I guarantee you would inhale this a heartbeat.

Believe it or not, I don’t have a huge sweet tooth, but I had one of the best milkshakes in existence at a place called Barney’s. Feel free to investigate.

We did other things besides eating too. One of my favorite parts of the trip were the night time bike rides through the city. If you’re visiting Amsterdam, you must rent a bike and do one of these night rides – the later the better. The city is totally serene and dreamlike, and the freedom you feel is hard to recreate.

I met up with one of my high school friends and his friends as well, and I’ll never forget the heart-to-heart we had, sitting on the edge of a canal in the Red Light District. Despite the nature of the venue, there was a certain peacefulness by the canal that is hard to experience anywhere else in the world. Buy sunflowers, sit along the canals, and soak in the sun. Amsterdam is a truly special city, and I hope to find my way back there again soon.

I loved Amsterdam, too! It was actually the first place in my travel journal that I wrote that I wasn’t ready to leave yet. We had seen everything that we wanted to see, but there seemed to be so much of the city that we didn’t know about and hadn’t covered yet! I definitely need to get myself back there as well!