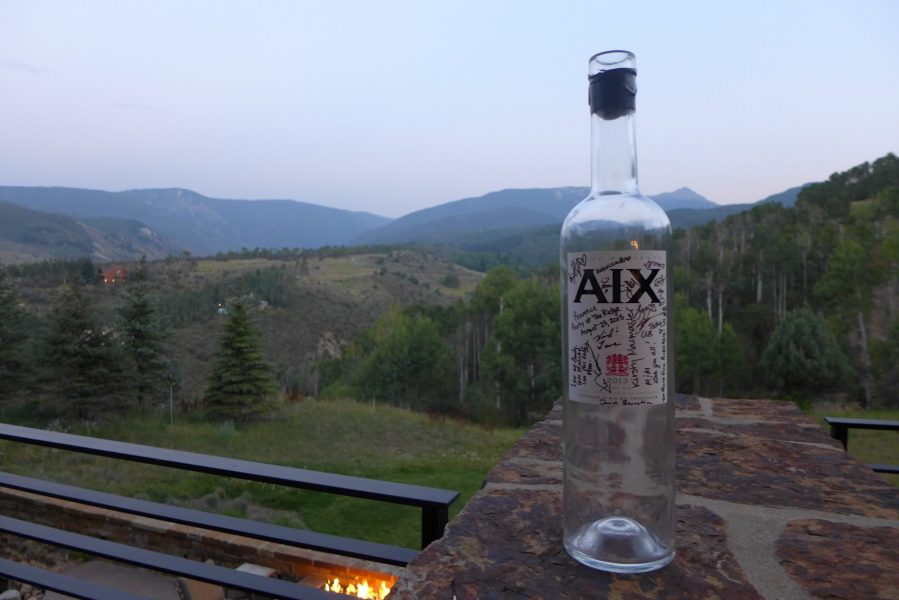 There are two things in life that have the ability to make me completely speechless: food and nature.

The Bernstein family was kind enough to have me at their beautiful home in Colorado. Without breaching the privacy of their sanctuary, their home was an architectural structure comparable to a sophisticated Frank Gehry, nestled in the expansive mountains.

I felt like I was at the nicest summer camp that ever existed. We hiked, golfed, explored the surrounding towns Minturn and Vail, and drank and ate vast amounts of gourmet food.

We enjoyed meals that literally reminded me of medieval feasts because of the sheer quantity and opulence of the food. There were two nights in particular that I went to bed feeling like a fat queen. One was a night where we had most likely the best BBQ I’ve ever eaten.

Mr. Bernstein, one of the few men who can rock a bow tie, woke up at the crack of dawn to get get his smoker going with fifteen pounds of pork. First of all, it was terrifying to see the fifteen pounds of pork because that’s exactly what I gained my freshman year of college. Second of all, I stopped caring once I started eating. He made pulled pork, deconstructed pork, and brisket (might be getting all of that confused), complemented by Kim Bernstein’s unbelievable and beautiful appetizer, beans, cole slaw, and like, everything else. I usually avoid cole slaw because it can be too mayonnaisey for me, but this one managed to be really crisp and fresh. Everything worked together so well and it really hit the spot, and by hit the spot I mean it was nuclear for my stomach.

I’m an emotional human being so obviously I have to go into the moment I got to witness after the meal. At the end of this BBQ extravaganza, we cleaned up and were just about ready for bed when we realized that there was a whole pork shoulder left to be shred. It had to be done before sleep because first of all, it was to be frozen for the winter and otherwise, there was danger of it congealing and not being manageable. So Mr. Bernstein arduously continued to shred the meat. He was tired and had been up all day without a break, and yet he continued to work. (Side note: none of the Bernsteins sleep, minus Becca, but Becca bakes)

The last time I had spent a significant amount of time with the family was in Kiawah more than a year ago. I don’t remember the context of the conversation but I’ll never forget the piece of advice he offered. He said that,”I didn’t have a lot of fun at your age because I was working really hard, but I’m having a lot more fun now since I worked so hard then.” This thought came flashing back to me as he pulled the pork apart. To be honest, it looked like true agony. But he patiently did the work he had to do because it would pay off come winter. So that was a big meal and a big amount of respect experienced in one evening.

That Sunday, the Bernstein’s threw a “Provence Party.” So I’ve been to a lot of dinner parties, but this was no measly dinner party for plebeians. ‘Twas a grand affair for fat queens and kings! Jackie aka Yogastagram made an actual menu for reference. Mr. Bernstein and his daughter also prepared appetizers – and by appetizers, I mean homemade pizza baked in their outdoor pizza oven.

Mrs. Bernstein on the other hand put pretty much every other hostess to shame by preparing all of the below. This was NOT a drill. My favorites were, oh, EVERYTHING.

Becca made a layered crepe cake comparable to the famous Lady M crepe cake (but it was obviously better), which was paired with a Peach Cobbler made by Mrs. Bernstein.

The most important part of the meal, of course, was the wine, which in the case was many normal bottles plus one six liter bottle of rosé. It was as big as my torso (considerably slimmer, but that’s neither here nor there).

The thing is, it seems like these meals wouldn’t be that common. It would be once-in-a-blue-moon-type deal considering the scale. But nope! Every meal was A MEAL. We drank like we were in college but with really classy cocktails and wine and I vegetated with all of the meat and veggies.

Aside from these two outrageous meals, even our “light lunches” were extraordinary. With Mrs. Bernstein, nothing is half-assed. In fact, this family is go-go-go all the time, which is why they are able to do so much and live such high-quality lives. Okay, anyway, here is the “lighter fare.”

The hospitality and generosity I experienced was really unbelievable. They treated me like family, which was frankly an honor. The daughter are some of the most diligent hard-working women I’ve ever met. Like any family, when their mom tells them to clean, there’s a lot of backlash. But when it came down to it, at the Provence party amongst other instances, they were cleaning and helping out without a word. So dear parents of all families, we are listening even when it doesn’t seem like we are <3

One of the things that has been hardest for me to learn and that I’m still getting used to is that family is tough. It is not chosen but given. With that said, in all of my experience (all 23 years… gasp…sigh…ugh), family love is the most unconditional. Why do we feel the most comfortable being our best and worst selves with our family? I’ve called my mom while having mental breakdowns about nothing. I’ve been extremely difficult with my dad because he orders too much food at restaurants and never lets me take them home as leftovers (it’s really frustrating, I swear!) I’ve said some terrible things to all of my family members and gotten terribly annoyed with them, and yet, they still love me and I still love them. No matter what, my mom is still my mom, my dad is still my dad, and my brother is still my brother. It’s unconditional through it all and it still blows my mind.

I witnessed the the affection, the frustration, and the deep caring that everyone in the Bernstein family has for each other. While my visit last time in Kiawah was special, I felt like this time around, I developed a much deeper connection with the family, from Jackie’s Yoga instagrams and willingness to take photos of camera-whore-number-one over here, Becca’s sweet and sassy artsiness, Mrs. Bernstein’s tireless effort to keep everything in order and feed the family, Mr. Bernstein’s shredding of the pork and patience, to CJ‘s loyal friendship and advocating of certain crucial products which we shall call Beyoncé Cup. I feel so lucky to be their Korean-Adopted-Daughter or Korean-Grand-Girl (Holla Nana! …or should I say, Challah?)

Again, feeling incredibly thankful and #blessed to have been able to spend time with this truly wonderful and generous family in their beautiful sanctuary.

Once again, it was all about being around the dinner table.

P.S. Man who works at Kemo Sabe in Vail – you’re gorgeous and we love you. Seriously, if you’re single, please marry me.