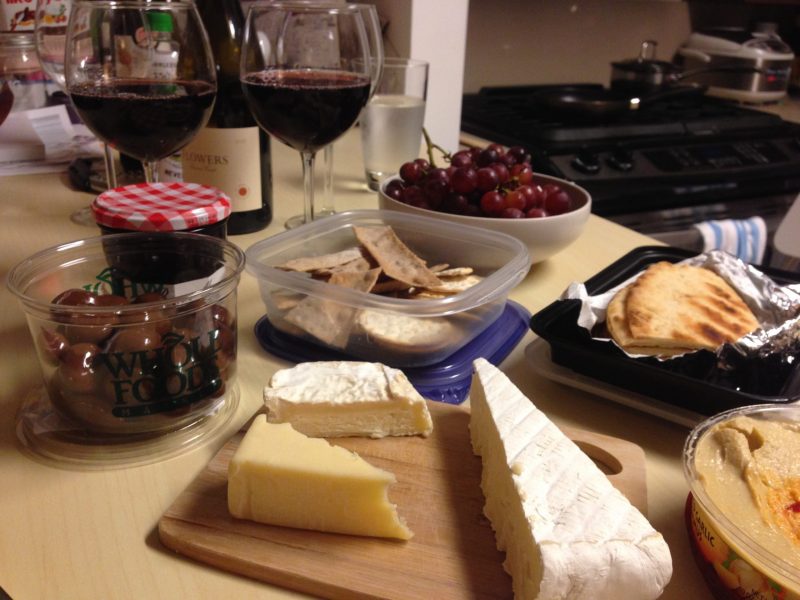 This city makes me crazy.

Some weeks, I feel like my existence is effortless. I’ll go about my day with something as basic as hot yoga, or I’ll meet up with a friend for a happy hour.

But sometimes, I’ll meet that friend for happy hour, and then it’ll turn into a happy three hours, which involve two bottles of wine for myself plus a couple of shots of whiskey to top off a crazy Tuesday night. (Go to Barrio 47 for a great meal and great drinks).

Or, I’ll go to SoulCycle on a Sunday afternoon, nearly puke, berate myself and wonder why I just had to stay out until 4am the night before as I tap it back to a Miguel song that I do not Adorn so much today.

But I feel like for the first time in a long time, I’m starting to sort of get the hang of it. I wouldn’t say things get easier, and I’m certainly not any less of a hot mess, but the anxiety attacks and mini-meltdowns have become less frequent (I’m fully aware that I’m a bit crazy). Nothing stops for you; the world keeps spinning and the sun keeps setting.

The idea that “life goes on” still catches me off guard. It’s both incredibly relieving but also a little bit intimidating. Friends move in and out of life, good and bad things happen to everyone, but the rest of the world keeps moving with or without you. People start following their own paths. Jobs, family, romance, and even gut instincts take us to places that are no longer in the same sphere as we existed in previously. As long as I can remember, my friends and family and I all moved together, taking next steps and experiencing milestones in unison. It’s not that way anymore, and it just feels weird.

Naturally, as paths diverge, friendships wax and wane, which is both unpleasant but can often times be relieving. You might have had a connection with somebody you thought would be unbreakable, but sometimes, that click just isn’t there anymore. Some people you thought would never be back in your life show up again, making things eerily full circle.

I keep forgetting that there’s no expiration date as of right now, as long as I stay healthy and happy where I am. For example, my friend lives farther uptown, an area I rarely venture to. But I want to see her neighborhood and her life in the unknown so I keep telling her, “I’ll make it up eventually and hang with you there,” but I realize there’s really no rush. I hypothetically have forever to hang out with her there. We don’t have to go back to school, and as of right now, we’re not going anywhere. Many times in my life, I’ve felt a sense of urgency to get things done before something else gets in the way, but now, I can just keep doing what I’m doing and expect that if I want it to happen, it’ll happen eventually.

Being single right now, sometimes I do feel a similar sense of urgency to pair off as more of my network gets engaged and married. To each her/his own in terms of romantic, but my friend illuminated me – she said that she would only become involved with somebody romantically if they make her happier than when she’s alone. At this point, she’s so comfortable being independent and doing her own thing, that she will only invest in somebody if they make her happier than that. That resonated with me because why would you waste your time on somebody who made you feel worse than you at your most genuine and authentic self? I had heard the whole “love yourself before anybody can love you” thing, but the idea of being happy alone as the reference point was another aspect that I hadn’t considered before.

Not to say that risks shouldn’t be taken. There are boundaries here and there, but life can be pretty liberating. The constraint is mortality but that can be counteracted with a “live without regrets” mindset. I hear it over and over and over again but in a given situation, if the consequences don’t harm or at least you don’t think they’ll harm, just do whatever it is you wanted to do. Give that random person your number on the subway. Drink wine and eat cheese with people you truly are excited to see, not people you feel obligated to see just because you haven’t seen them in weeks. Ultimately, nobody really cares about you. Everybody is busy figuring their own life out. That on its own is liberating, especially for those of us who err on the side of people-pleasing. You should do what you want – in other words, you do you.

This city makes me crazy and cliché, but I’m still swimming 🙂