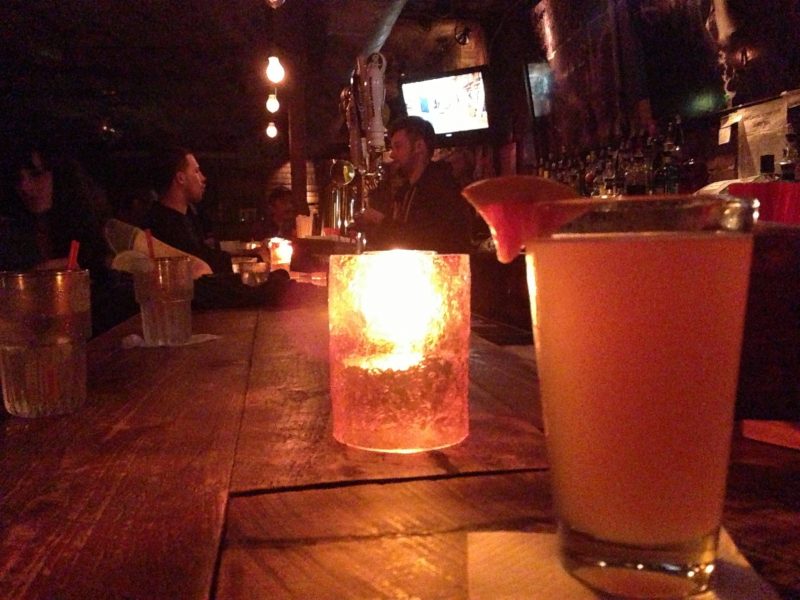 I got the chance to spend the week after finals and before Commencement in New York and Brooklyn, and it only reinforced my decision to work in the city this summer. Considering I had spent my fall and winter in Paris and all over Europe, I was missing the cultural excursions, the amazing variety of good quality restaurants, cafés, and bars, and the general hustle and bustle of city life. But the past week, I got to relive it.
As soon as we got to Brooklyn, my friend decided to show us around at night. We were also considerably more excited to do this on a Sunday night because two of us had only recently turned 21. So we walked around a very quiet Brooklyn until we reached a bar called Camp. To be honest, it looked mad sketchy from the outside. Flashback to Paris when this same friend really wanted to go into this bar called Tape, but all of us vetoed that decision considering there was smog ominously floating out of the windows – however, my friend justified wanting to go in with “ETTS JUST RULLAY HIPSTERRR!! AREN’T I HIPSTER?? I’M SAOOOO HIPSTER!!” For Camp, it was déjà vu. But this time, we decided to “yolo” it and went in.
It was actually a really cool atmosphere. Being called Camp, its concept is outdoor camp with S’Mores and wooden benches and a cabin-like interior. I also had my first Blue Moon, which was wonderful!! They also have Tuesday Karaoke nights so I’ll be sure to visit again soon.

On the first day out and about, I went shopping with my friends in Soho. I am still specifically looking for a cut out sleeve top – if you know of any cute ones, please let me know. But obviously, my friend and I got really hungry because we have the metabolisms of a cheetah, but not at all, so we decided to check out some of the restaurants around Soho and chose Boqueria, a tapas restaurant.
I love the concept of an assortment of small dishes because I always want to order literally everything on the menu, but obviously that’s not exactly viable. But now I kind of can with tapas!! Thanks to my friend who had visited Barcelona before, we ordered some traditional tapas including Pan Con Tomate, Patatas Bravas, and Croquetas, and we also ordered Lamb Meatballs. Given that we ordered only five plates, we were very full. But tapas restaurants have been popping up everywhere these days, and I highly recommend them. I don’t remember why we didn’t order some red wine to go along with our meal, but I would recommend doing that as well.

Another restaurant we went to was called Bombay Talkie, an Indian restaurant based on Indian street food. The food was great, and the drinks were REALLY REALLY strong. Some of the drinks had great names with great captions, such as “Unrequited Love.”

Aside from the food, my friends and I were super cultural and cosmopolitan (ha…) and went to the Brooklyn Museum and Brooklyn Botanic Gardens. They’re both really worth a visit. I loved the Brooklyn Museum because first of all, it houses some of my favorite artists, such as Kara Walker. Second of all, their main exhibit right now is El Anatsui, an African artist. One of his primary concepts it that art is not fixed and that it is a nomadic, community experience.
This piece actually reminded me a bit of Klimt. Am I right or am I right??

I even got to see THE Dinner Table by Judy Chicago, a prime feminist piece.

The Brooklyn Botanic Gardens were also beautiful. I love the idea of an enclosed, natural space within a city. Also, I had just gotten a pedicure the other day with a color that matched these flowers!!!!~*~*~*~ I’m embarrassing.

And lastly, on one of the afternoons I had to myself, I found myself in a Thai restaurant called Thai Lantern. As soon as I saw Pad See Ew on the menu, well, I ordered it and ate it. That might sound a little anti-climactic but you have to understand that Pad See Ew is one of my favorite dishes, after discovering it in San Francisco the past summer. I love it even more than Chicken Pad Thai at Fresh Side, for a certain someone who knows I always order Seaweed Salad and Chicken Pad Thai there…

We also visited Biergarten at the Standard, which was probably one of my favorite bars. It’s modeled after Oktoberfest and made for a really warm social setting.
Needless to say, I was pretty sleep-deprived, but I’m extremely excited for the upcoming summer, exploring all of New York City and its culinary and cultural delights 🙂

YOU’RE GOING TO BE IN THE CITY THIS SUMMER?!!!! PLAYYYDATEEEE!