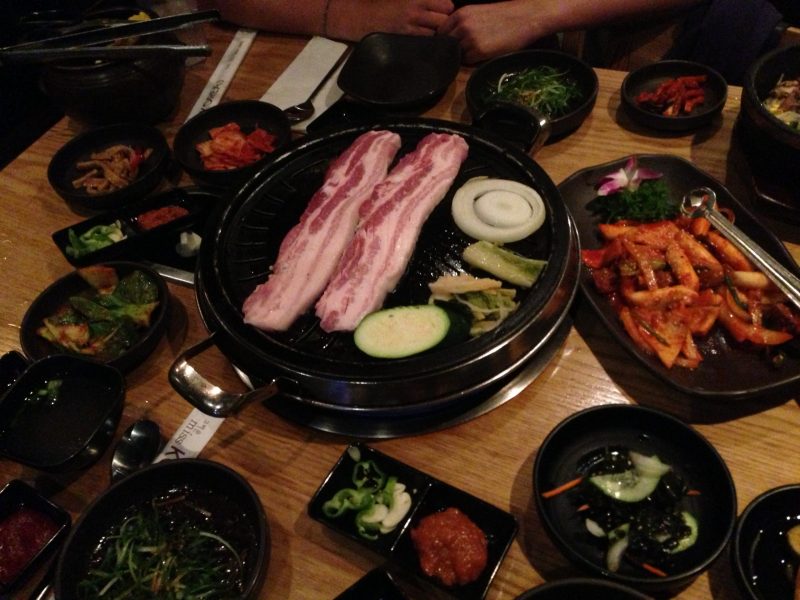 Find my original post at Sweet Lemon Magazine!! I’ll be writing NYC recs there for the summer 🙂
I’m all about Korean pride, and I am lucky enough to have friends who are obsessed with Asians (that might be the only reason we are friends), so I wanted to take them to Koreatown. Korean BBQ is the most popular among non-Koreans so another friend recommended to me Miss Korea BBQ. As soon as I got over the name of the place, I took them there.
You know you’re in Koreantown when you find yourself surrounded by Asians. Going to K-Town is like momentarily stepping out of Manhattan. It’s a street in Midtown lined with Korean markets, restaurants, and Karaoke bars (Koreans are notorious for getting drunk and feeling the need to sing). They even have a Pinkberry!! Actually, that shouldn’t be that surprising considering it was a Korean who started Pinkberry and Red Mango, etc…woo!! I edited in a heart around the Pinkberry because I <3 Pinkberry!!

At Miss Korea BBQ, we ordered Marinated Kalbi (beef), Pork Belly, Dolsot Bibimbap, which is rice, vegetables, roots, egg, and beef mixed and cooked in a clay pot, and Spicy Rice Cakes.  And as in all Korean restaurants, we were presented with an assortment of small plates that come with every meal. They grilled the beef and pork right in front of us, with the oil sizzling next to browning onions. I was honestly so impressed with how much of it my friends ate, because Korean cuisine isn’t as widespread as say Japanese food or Thai food is in the States. Seeing my friends enjoy it was so much fun, and I think this was definitely one of the more authentic and delicious Korean restaurants I’ve been to. I highly recommend this restaurant and Korean food in general, as there’s a huge variety and tends to be very balanced and healthy.

Afterwards, we went to one of the many Karaoke bars where we ordered Soju, distilled rice beverage/alcohol, and beer, and mixed them together – and we never saw them again…just kidding. Thanks to the clouding effects of the Soju and beer, we sang Whitney Houston and Christina Aguilera songs. We thought we sounded pretty good – but we’ll leave it at that.

Reblogged this on K-Town NYC.