A Night of Jewish/Israeli Food 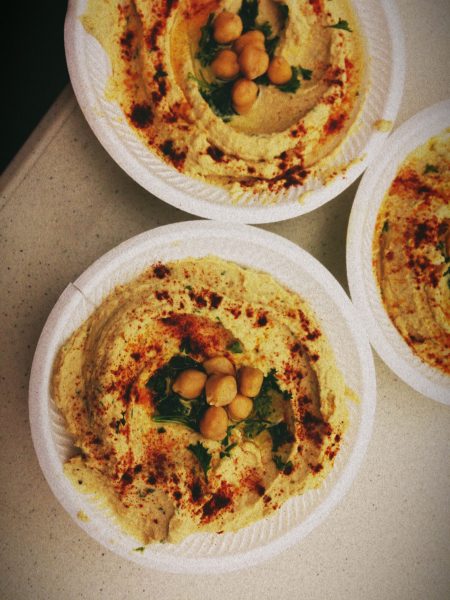 My golf team has traditionally been composed of two types of girls: Asians and Catholics. But this year, we were thrown a curve ball when two Jew-ish girls graced our yellow and waspy team. But I say Jew-ISH because neither of them are particularly Jewish…but kind of are? I don’t really understand to be honest, but they went to Israel for a birthright trip and haven’t stopped talking about it since.
The point is, a couple of weeks ago, they invited us to a “Passover” dinner that they had prepared for us. It actually wasn’t really a Passover dinner but mostly a combination of the best Jewish and Israeli foods (although we wholeheartedly and probably really incorrectly went through some of the Passover traditions). They prepared for us couscous, Israeli salad (I think that’s what they called it…or maybe it was a Jewish salad, I don’t remember), hummus, Matzo ball soup, schnitzel and strawberry rhubarb pie. The meal made me want to be Jewish (Israeli?!)
But you can imagine when I tried to describe to my friends what I did that night: “I had a team Jewish dinner”…“What?”…”There are two girls on the team who are kind of Jewish but not really and they decided to cook us dinner!!”…”…”
You’re only jealous that you don’t get to hang out with two of the coolest Jew-ish girls out there.
Also, mind blown: one of these girls asked me if I like chickpeas since I always put them in my salads, and I replied yes, and she then pointed out that’s probably why I like hummus…BECAUSE HUMMUS IS MADE OF CHICKPEAS. Isn’t that cool? I thought it was.

See the Star of David…??