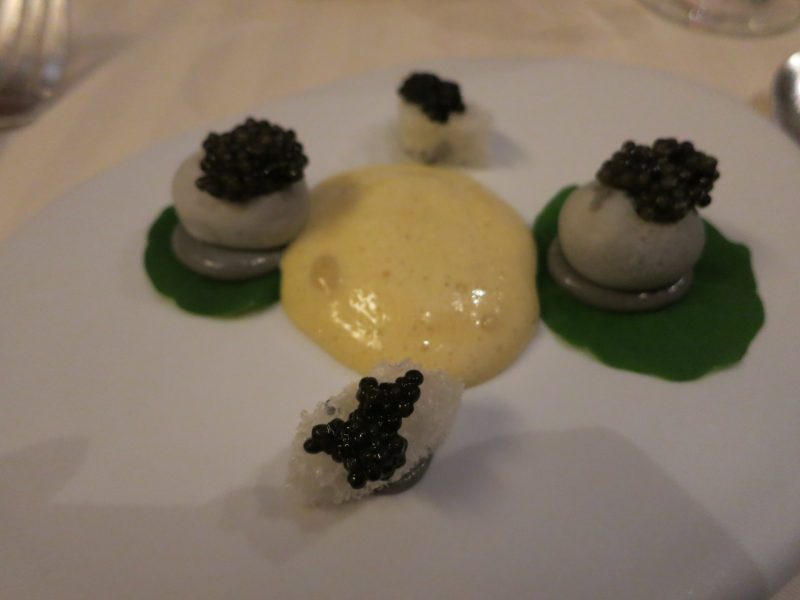 Guy Savoy (Gee but not like Golly Gee, Sahvwah) is a Michelin 3-Star (5 star on any other scale) restaurant I went to last night. It was absolutely spectacular. The best restaurants obviously have the best food; the purpose of a restaurant is to feed the customer. But what really separates the best from the outstanding is the service. The moment we enter, we are greeted by the servers and hostess and a slew of other workers who seem to pop out from the walls, perfectly stacked and synchronized. After we’re escorted into our seats, we are greeted by Oubert (I have no idea how to spell his name and yes it is Oubert, not Albert), a very entertaining, vibrant manager-esque figure. ***UPDATE: HIS NAME IS SPELLED HUBERT.

There was another server who was with us all night, bringing us plate after plate, garnishing, flourishing, presenting. I can’t emphasize how meticulous, careful, and professional he was. He was born to do what he does. He also looked like a more attractive and awesomely French version of Neil Patrick Harris. So I’m going to call him Neil in this post. There was also a lower-tier server who looked about my age and should probably be a model on the side. He was a tall, attractive version of Justin Bieber. He shall be my Justin.

And then, let me tell you, AND THEN, there was the sommelier. He was pretty young, I would guess late twenties to early thirties, and unebelievably attractive. I was already intimidated by the fact that we were in this five star restaurant, and to be honest, being a sommelier is quite an honor, especially at a restaurant like this, but being a sommelier is one of the most pretentious things you can do. Most occupations you have to have talent and diligence, but when you are the mercy of a sommelier, it is based on talent, diligence, but mostly personal taste. It’s a highly competitive industry, so basically, this guy was gorgeous, talented, intelligent, and at the top of his game. So obviously I was simultaneously trying not to blush everytime he spoke to me (IN FRENCH good lord my head was going to explode), which proved impossible because the wine was starting to get to me and I get really flustered by attractive men.

But on to the food. The restaurant is named after the chef Guy Savoy – very famous in the culinary world so I suggest you look him up because when he came around to our table to give us a smile and a “Bon Appetit,” as he did to every table, I reacted maybe about twenty seconds later with a squeal and set of a stifled laughter by the staff. I got to meet him and take a picture with him too! Neil took us to the kitchen where we saw the chefs and cooks (all extremely attractive as well) who probably wanted to kill us since they had to get to work (think Hell’s Kitchen) and we posed for a picture, or two, or three with our iPhones and compact DSLR’s and not-so-compact DSLR’s. Neil was patient. Neil is the best. Neil is my main byetch.

We chose to have the Set Menu, which is served to everybody at the table. Et voilà, bon appetit…in your head.

I wasn’t able to get a picture of it, but the super awesome professional server came around to us with little toothpicks and a plate of foie gras and mini pieces of toast.

“Surpise” from the Chef

Homard bleu “cruit” en vapeur froide – this one was really cool. Neil presented us with an already beautiful dish, as you see on the left. But then he poured some liquid on it, and all of a sudden, there was smoke. I had an idea of what it was and as if answering my question, explained that there was liquid nitrogen on the bottom plate. There was also a chilled soup to go along with each bite of the lobster. We had to consume them simultaneously, taking a sip of the chilled soup like a “café” each time.

Caviar et pommes de tere en galets, l’oeuf en sabayon fumé – I think it was because there was potatoes in this main caviar dish, but they served us fine slices of fried potatoes. REAL FRENCH FRIES OF PARIS.

I’m typing in the name of the dishes based off of the copy of the menu I have in front of me (I asked Neil for it and he gave it to us in a beautiful bag. I love this place.) But I can’t seem to find the following dish on it. I know it was in between these two courses. Name doesn’t matter. This was something from the clam family.

Foie gras de canard poêlé, “bouillon-infusion”, saveurs amères – Starting with the very first couse, Neil kept pouring different herbs and liquids into the pot and let it simmer and sit each time. After all of those times he visited, Mad Hatter Patrick Harris finally poured the delicate scarlet concoction into the dish.

This came with the meat above, but these potatoes were one of my favorite parts of the meal.

I almost forgot to write about the bread!! There was a basket of bread that one of the servers would bring by, giving us a different bread with each course or more of the same bread if he noticed that one was disappearing more quickly than the others. And there was one called “pain sans raisin.” It was literally the way Remy from Ratatouille described, “a crunch that could shake the earth,” and silky inside.

It was a fantastic meal and experience. I have to reiterate how unbelievable the service was. The sommelier somehow would see everytime our glasses of water would be closer to empty and refill it. EVERY TIME. And he was serving more that just us. It sounds basic but the way he did it was  godly. I would love to go back again, if only to hang out with Oubert and Neil, and do more than hang out with the sommelier and Justin…

[…] JUST RECEIVED A PERSONAL EMAIL FROM GUY SAVOY BECAUSE I GUESS HE STUMBLED UPON MY BLOG POST ABOUT HIS RESTAURANT!!!! LITERAL HEART ATTACK AND SO HAPPY DREAM COME […]

I think every meal I eat will now seem inadequate….