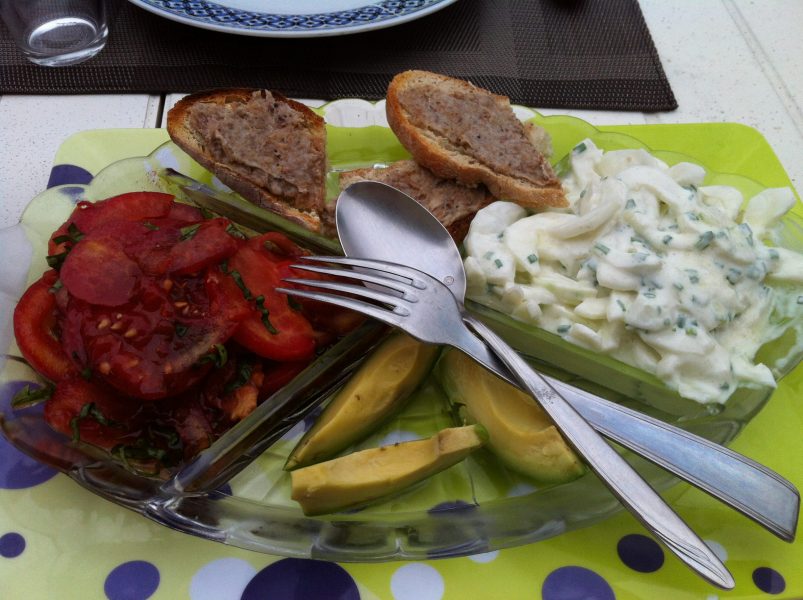 Here are a couple of things I was worried about for my semester abroad:

1) Gaining a large amount of weight while in France

That’s actually about it. Has the worry subsided? Nope! Why? Because my host mother is an amazing cook. I had secretly been wishing that she would be a terrible cook so I wouldn’t eat as much, but of course that isn’t the case. I knew I was in danger when I saw her bread cutter (things I’m absolutely investing in along with a crockpot when I’m on my own) and her recipe book propped up on her counter.

She is also a huge gardener, so all of the vegetables and herbs, such as the cucumbers, she uses are fresh from her garden. (Not the tomatoes this time around though because her tomatoes are not in good shape right now, poo poo).

Let’s give me some credit though – I went and picked a branch of one of her herbs for the sauce (pictured by the salmon and rice). I basically made the meal. Just kidding, I just ate it.

I have a roommate (not actual roommate because we have separate rooms) for the first two weeks in Tours, and she noted that the French savor each bite and dish and course, with their slow-paced eating; I don’t think the concept of “fast-food” exists here. It was essentially a four-course meal, cheese and all. Looking forward to the day you guys can’t recognize me when I become the first female Korean sumo wrestler!!