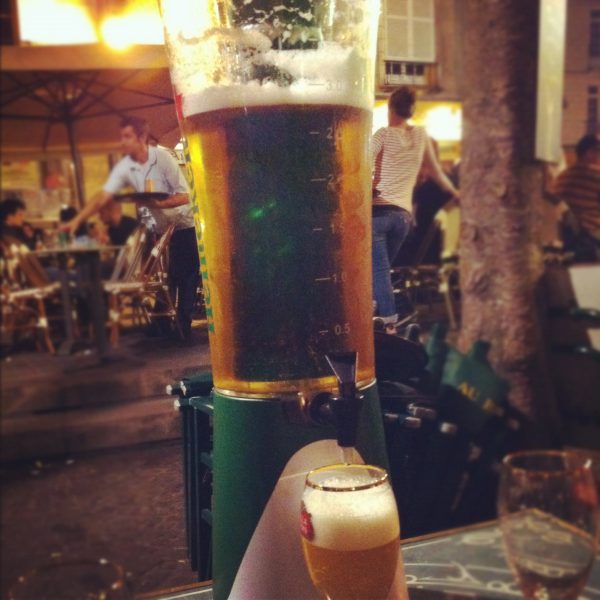 It’s funny because I’m writing this on the Saturday night after, waiting for my roommate so we can go out. This will be my second time out and my roommate’s first. That’s irrelevant though because I’m tryna talk about last night.

A group of us met up at the Hotel de Ville, a beautiful building in the center of the city, to figure out where we were going to go. We had two options:

1) La Guingette: a riverside bar and hangout with live music

2) Place de Plumereau: a plaza with a bunch of bars, a club, and a variety of cafes and other good hangout spots (according to the bouncer turned employee at “The Phone House,” this was the place to go)

We started off walking with the whole group, but three of my friends and I branched off in fear that we would be too conspicuous and “American.” Volume control is generally the issue but I lack that on a personal level, so it was lose-lose situation. Regardless, we took a peek at La Guingette but saw that the live music for the night was the ever-calming screamo, so we branched off and while the larger group went to La Guingette, we chose to go to Place de Plumereau (Plume for short).

We went into the main square where all the tables were grouped in the middle, and we chose a table and sat down. I believe we sat down at a table of the Au Bureau bar. This is what we ordered:

It’s called a “giraffe.” I thought the waiter said “giant” at first. I think both work. Let’s all be honest Annie’s here for a second (I don’t know if all Annie’s are honest but H names don’t really work with “honest” unless you want to obnoxiously pronounce the H in honest). Americans generally tend to drink to get drunk, sloshed, schwasted, browned out, blacked out, whatever. But this was a completely different atmosphere. People young and old were just sitting at their respective tables casually drinking their beers or glasses of wine. It could have been twelve in the afternoon for all we knew. It was so much more laidback and much more about the people you were with than the actual alcohol itself (although it became a little difficult to focus on conversation after finishing the whole beer giraffe, if you know what I mean).

After we were finished, we went to the bathroom, which was co-ed, and met a French guy who asked us to come drink with him…but that story is for another time 😉