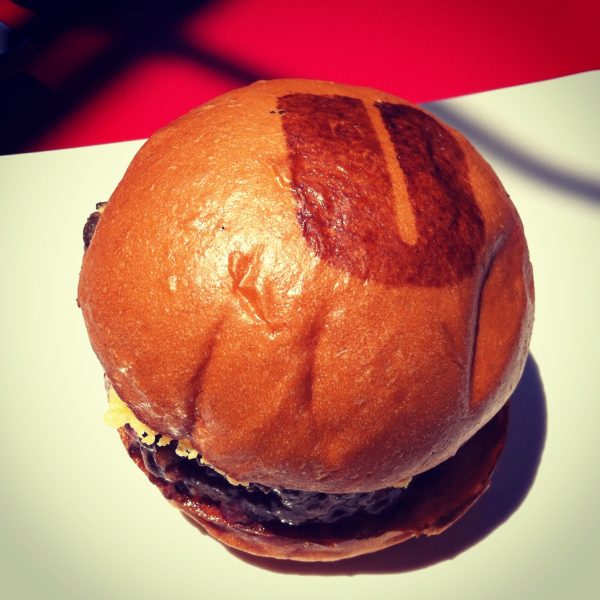 Woof! Herro!! Let’s bring it on back to the food. So this past weekend, We hit up four places and one food truck stop which I’m not really going to talk about because it wasn’t particularly special and I had some issues with undercooked chicken (#PTSD).

The first stop was UMAMI Burger, which I would describe as in falling in the middle between a hip burger joint and a high-end concept burger spot. I was with three friends, including my one vegetarian friend (look to previous post). We three carnivores ordered three different burgers so we could cut them and split them, and my vegetarian vixen ordered her Earth Burger. I don’t really go searching for burgers in general, but my god, I had to stop myself from just taking all three plates to the bathroom and eating it all secretly (or not-so-secretly). My favorite was either the Truffle burger, which was so rich and flavorful, or the Ahi Tuna burger, which was fresh and tangy with an Asian flair. We also ordered the UMAMI burger, which was also delicious, just not that special. I was quite frankly too distracted by the other two, similar to the way I choose to completely tune somebody out when I’m convinced that they are disagreeing with me even though they completely agree with my taste in Chai.

We then went to the Sprinkles Ice Cream shop. We were going to go to Crumbs AND the ice cream stop, but first wasn’t the worst this time and won all of our love and bloatedness, so we only got the ice cream. I got the Cap’n Crunch ice cream sandwiched by two red velvet cupcake tops. Sometimes I remind myself of a chubby panda bear deprived of any bamboo during childhood.

And then we went to a very authentic Thai restaurant on the Sunset strip called Night+Market. Everything was delicious but spicy. You know how when you eat spicy food, you just can’t focus on anything and are constantly fanning yourself while tearing up. Yup. All of us.

hoi nang rom sod | raw oysters on the half shell

For our final meal on Sunday, we went to Chosun Galbee in Koreatown which has Korean food more famous than Korea itself. Nal jom barabwa

Check out theasianwhale.tumblr.com for more food pictures taken by yours truly!!

[…] UMAMI Burger would be opening in Greenwich Village. A slew of memories came rushing back from a visit to LA a couple of summers ago, notably, a meal at the UMAMI in LA. Ever since I ate there, nothing has […]